Sometimes inspiration for a Microadventure can come from something as simple as someone simply asking you to join them.  Last months paddle on the canal in the Brecon Beacons was that simple.  Thanks Carl!
That trip really whetted my appetite to explore the Eastern Beacons further.
By the first week in July however the phone hadn't rung so I was looking for some inspiration for myself.  It started with simply looking at the Ordnance Survey map.  Initially looking to see what other camp sites there were to use as a base with safe parking and a tap.  I found a couple and idly looked them up on Google.  One, Llanthony Priory caught my eye thanks to its price (£3) and its apparently beautiful location right next to a ruined priory.
Funny how things slowly build.  I pulled out the map again and slowly opportunities started to present.  The Priory is in the Vale of Ewyas.  Offas Dyke long distance path runs along a ridge on the North East side of the valley and another good looking ridge parallels it to the South West.  In seconds two good days walking leapt out.  The site was also close to Waun Fach and Grwyne Fawr reservoir.  Both places I had a yearning to overnight at.
Having started with not much in mind I had swiftly found a weekends exploring to do with the opportunity to scout out places for the future.

Setting off on Friday morning the weekend forecast looked poor with the best of the weather likely to be that afternoon.  I made good time and decided to bring the days ridge walk I'd planned for Saturday to the Friday afternoon and evening.  The long, light summer evenings give that flexibility.
Climbing out of the Valley on to Offas Dyke gave a stunning view of the priory and campsite field. 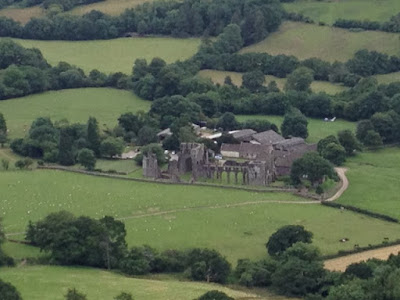 The weather was fine and clear giving glorious views in to England. 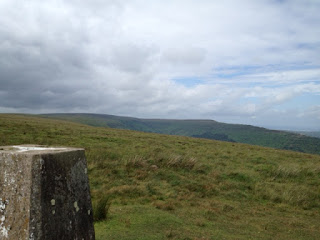 Arriving at Hay Bluff in the early evening I was reminded that I was following the national border! 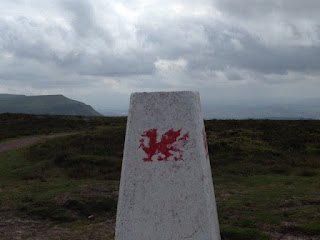 The walk out had been accompanied by a constant and strong wind that was bringing the weather front in.  Rather than stay exposed I opted to walk back from Gospel Pass (I love place names like this) down the valley.  Out of the wind and with the evening sun out I had a carefree couple of hours walk back to camp arriving just as the sun was setting for a late dinner. 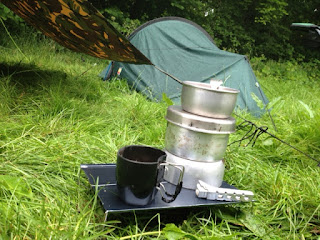 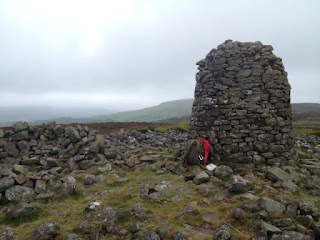 Day 2 was a poor excuse for a July day with low cloud and squalls of rain.  My plan was to follow the ridge on the other side of the valley North West to check out the reservoir and high ground I wanted to visit later in the year.  However, coming out of the valley the wind got stronger and the rain got harder. Coming to the ridge I looked towards my intended route to see the high ground obscured by racing, claggy fog.  A soaking pair of walkers approached and gave their opinion - 'It will be horrible mate!'.  I was not going to see much of anything going that way so followed the ridge line South past a high Cairn and wind break towards Cwyn y Gaer an ancient hill fort marked on the map. With the weather still pretty grim I opted to drop down in to the Valley for my return trip.


Day 3 dawned with the weather brightening.  I took advantage of an early start to check out the priory ruins before anyone arrived. 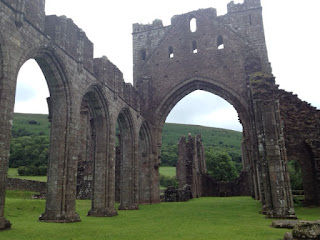 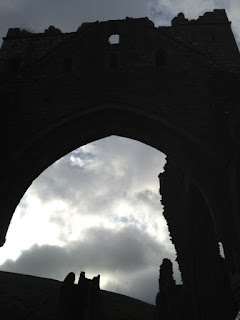 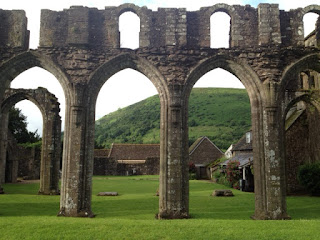 I took my time packing to give everything a chance to dry out.  With a long drive home I took a quick detour to check out The Skirrid.  A lump of a hill standing alone which gave yet more glorious views. 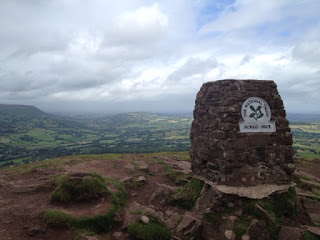 So,  in the absence of any other inspiration an hour with a map and a willingness to be flexible and just have a nose about can deliver a cracking weekend.