Sometimes its about the journey 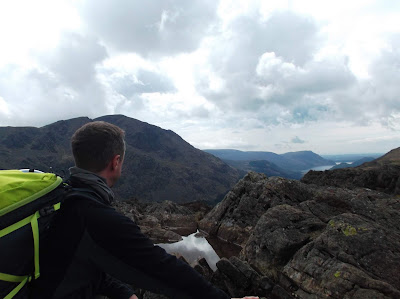 There is a saying that when life hands you lemons make a gin and tonic!  So when injury and work dictated a shorter adventure we made the most of the journey rather than the destination.

From humble solo microadventures a couple of years ago trips are now developing with other like minded individuals.  I am lucky enough to have access to a house in the UK Lake District and have agreed to start getting there for a couple of long weekends a year with good friends Steve and Carl.  As April approached I started to look at an itinerary.  I thought it was important to make the most of our relatively short time together with as much ground travelled as possible.  A good long walk up something or to a feature was going to be the mark of success.

As our agreed weekend arrived however plans had to be changed and, what for me was a bit of an epiphany, took place.  Steve was struggling to get time off from work so had to travel separately with only Saturday to spend out and about.  On top of that he was struggling with a knee injury that precluded long distance walking or travelling on difficult terrain.  I also had to meet someone on the Saturday morning to discuss some work on the house where we were staying.  I also forgot my walking boots !  This meant whatever I walked had to be suitable for trail shoes.  Overall things were looking like a bit of a washout but we were all loathe to cancel a rare trip away.

As luck would have it I found a newspaper article (The Times) with a relatively straightforward walk of less than five miles to Haystacks from the top of Honister pass.  Whilst there would be some height to gain much of it would already be below us and the route followed mining paths for much of the way with no exposed walking which, if I’m honest, always leaves me feeling very uncomfortable. 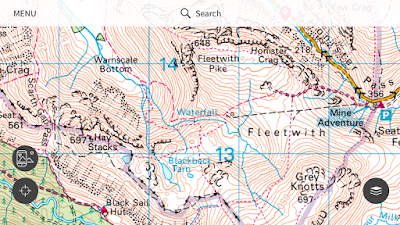 So, we arrived at Honister Pass just before lunch with the whole afternoon to travel a relatively short distance.  This changed the whole approach to the day.  Far from wanting to crack on to achieve great things I adopted the mindset of enjoying the journey rather than focusing on the destination.  Many people will be well ahead of me in developing this attitude but as someone who has always focused on the end having to be better than the beginning and achieved only after hard work this was a liberating mindset.

Parking behind the Youth Hostel (for free thanks to NT membership!) we set off at a leisurely amble pretty much due West along the dismantled tramway which served the surrounding, mainly disused slate quarries.  We were blessed with fine, clear weather with only the slightest of breezes.  Knowing how quickly the weather can change in the hills we stopped after less than half an hour to enjoy lunch.  As you tuck in to a pork pie on a hillside far from work and the stresses of daily life you quickly start to appreciate how important trips away, even short ones, are to well being.

Lunch finished and with the weather improving we carried on with the heights of Grey Knotts to our left.  Dropping down briefly to cross the stream near Little Round How we carried on to Blackbeck Tarn.  Again we took our time looking North between the Crags to the valley of Buttermere well below us.  I began to appreciate how fresh I felt not having trekked up from the valley floor.  I know it would have been satisfying but there is something equally satisfying about enjoying a pretty view feeling fresh. 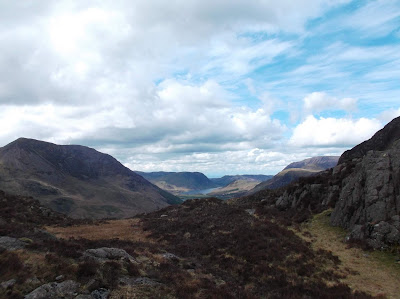 It was as we headed North West for the final kilometer to the top of Haystacks that the highlight of the day took place.  The breeze had dropped and the sun was getting equal billing with the light cloud.  We turned a corner to Innominate Tarn which was flat calm and totally quiet.  In absolute silence we were treated to the reflection of the sky and the distant heights of Pillar in the totally flat waters of the tarn.  I know Wainwright was moved by the beauty of Haystacks and had his ashes spread there.  Seeing the tarn as it was that day I can understand why.  The calm, tranquil majesty matched any cathedral I have visited.  We all tried to capture the moment and having done so just stopped and enjoyed the moment speaking only in whispers to avoid breaking the spell.  How glad I was that circumstances had dictated a short, no pressure walk. 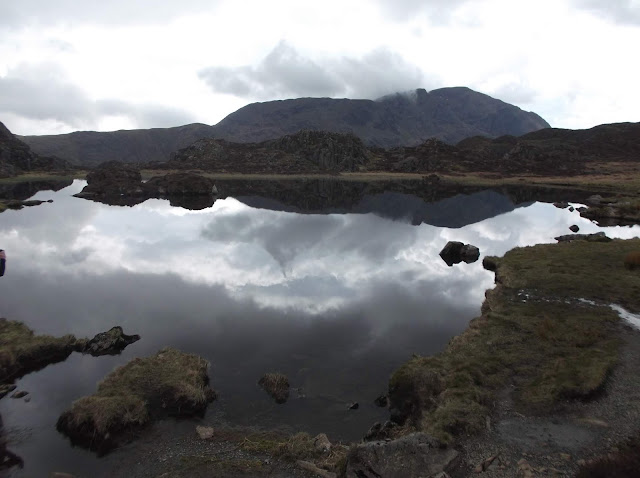 We had all the time we wanted to enjoy the experience without the need to make for the next way point.  That feeling of calm and tranquillity followed us to the top of Haystacks which is really a series of tops with stunning views of the surrounding peaks and valleys. 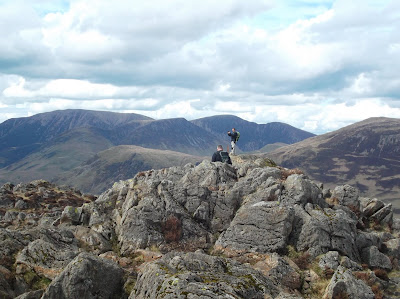 Having spent as long as we wanted admiring the view we had a leisurely descent via the Southern edge of Blackbeck tarn and the Northern contours of Grey Knotts back to the disused mining path and the car park.  The slower pace allowed us to watch birds of prey circling and Steves gimlet eye to pick up the remains of their catches including tiny bones and teeth in droppings that we would have just marched past if we’d had a schedule to keep.

As if on cue the weather began to turn as we reached the car in the late afternoon.  Emphasising even more the treat we had just been given of a fine afternoons leisurely walk with time to really savour the beauty of the fells.

Steve had to leave for work the following morning.  Moved by our experience Carl and I agreed on a short walk to Rannerdale Knotts on the South of Buttermere.  Reaching a high point we looked towards Haystacks and our discussion turned to plans for future visits.  We both agreed they would be more about shorter, quality exploration of this stunning landscape than trying to pack too much in and miss the majesty.  With that came the realisation, perhaps late, that it is all about the journey.
Posted by Steve at 15:08