I find that my Microadventure plans evolve over time.  The date usually gets sorted in advance to fit in with work and family.  However what I'm actually going to do often emerges as much by chance as by design. My October Microadventure was a case in point.
I'm in the habit of picking up some sort of out doors type magazine now and again.  Often they are filled with tales of people climbing stupidly high mountains in remote places.  Nice to read but for a man with a fear of heights not always achievable!
A couple of months ago though I came across a Brecon Beacions walk in 'The Great Outdoors'.  It involved a sensible distance, some sensible(ish) terrain with nice views and an overnight by a Lake.  Sounded good.  I also went and bought the OS map for the area, as much to give some ideas for future adventures as for navigation on the walk.  Its funny how the time spent poring over a map starts to whet your appetite and cement a hitherto slightly ambiguous set of ambitions.  Something I'm not sure I get from checking things out on line.

My plan was to park in Glyntawe.  Walk West from the National Show caves for a few kilometers before turning North on to the long ridge running East - West on the Black Mountain.  Ridge walk for a bit before dropping off the ridge to Llyn Fawr lake where I'd camp before heading back in the morning.  Classic Microadventure stuff!

So, the last weekend of October arrived.  I'd taken Friday off with a view to having the hills a little quieter than a Saturday.  I don't think I need have worried!  Arriving at about mid day my plan continued to evolve. Rather than a walk through pretty featureless terrain I opted for a straight climb up to Fan Hir to give enough time to get to my planned overnight spot without having to route march! 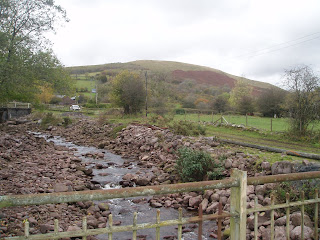 From the bottom everything looked calm and inviting. 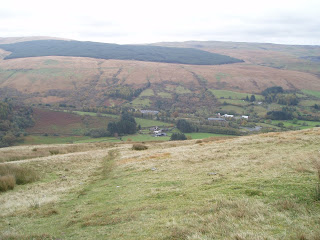 A stiff walk got me up on to the beginning of the ridge with pretty views already beginning to appear.  Both down to the valley I'd started..... 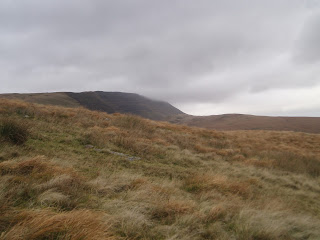 ...and up the impressive Fan Hir ridge.


As I began the steady ascent to the main ridge it struck me how quickly you start to relax walking in the hills. Fresh air, a bit of exercise and the only mental pressure being checking the map you soon start to get a sense of perspective on life.
I also started to get a perspective on the weather.
The gentle fog I'd seen higher up the ridge soon began to close in accompanied by stronger winds than I was expecting.  The path also started to get much closer to the edge of the ridge.  One I knew had a fairly stiff drop. 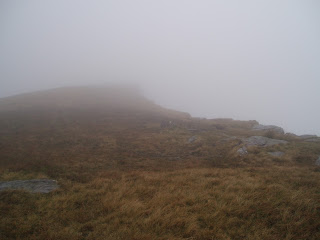 I was looking for the path which drops off the ridge down to the lake.  However, visibility was getting poor, the ground was getting very slippery and my sense of adventure was starting to be overcome by my sense of self preservation.  I have no shame in stating that I lost my bottle and decided to turn back rather than risk an accident on my own even though I had left my planned route and alternatives with family!

So.  Staying flexible and allowing my adventure to take its natural course I changed plans and decided to head off the ridge and approach the lake from its base rather than its summit.

Time however was passing.  Sharing a cheery hello with a ridiculously young man in camouflage who clearly had no concerns about heading over a misty hill I reached the base of the ridge.  The time was now 1630 and I was not sure I was going to get to the lake in day light.  Yes, I could have cracked on but the whole point of my trips is to have fun rather than wear my self out and get lost! 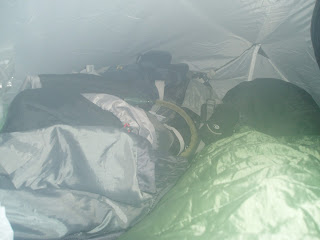 I headed for the National Show Caves campsite where, for £7 I spent a very pleasant evening! 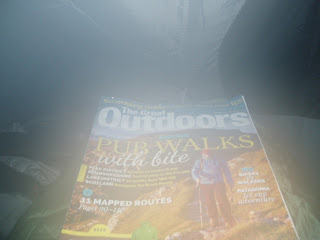 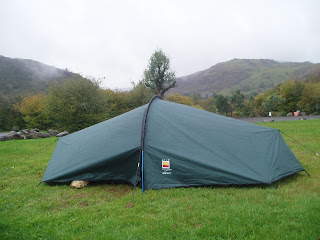 It rained hard during the night and, not for the first time that day I was glad I'd opted for a (pretty empty!) campsite.


The weather was still pretty grim but having turned back the previous day I felt I had unfinished business with a lake, (and no real urgency to be home).
Looking at the map I could see that there was a good looking three or four kilometer walk allowing access from a minor road to its East.

Being up in the hills again the weather had closed down to heavy rain and mist.  This meant walking on a bearing over marshy ground with no long view to check direction.  It struck me how easy it would be to get lost, even relatively close to roads and villages.  Again I was glad I'd invested in a paper map and left word. 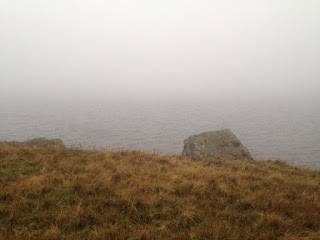 A steady and increasingly wet walk had me doubting my direction at some points but then suddenly, after topping a small rise the dark waters of the lake emerged.  The photo doesn't really do it justice but it was incredibly atmospheric.  Coming upon it suddenly it looked like the lake in Lord of the Rings where the party enter Moria.  Thankfully no scary tentacled beasties appeared!

I used the opportunity to check out the surroundings for future visits.  Everywhere was several inches deep in water due to the heavy rain and the path down from the ridge looked precipitous and slippery.  I was really glad I'd changed my plans as a night in those conditions would not have been fun.

By now the rain was horizontal and visibility non existent.  I followed a back bearing for the car.  A river I'd crossed on stepping stones on the way up was now much deeper.  Wading it felt rather intrepid and I was soon back at the car and ready to head home satisfied.

I'm glad for all sorts of reasons that this microadventure evolved, both in the planning and the execution.  I found a region I want to visit again.  I found a secure place to use as a base.  I had the sense to recognise my (albeit self imposed) limitations and the confidence to develop alternative plans.  Sound like the basic principals for any adventure!