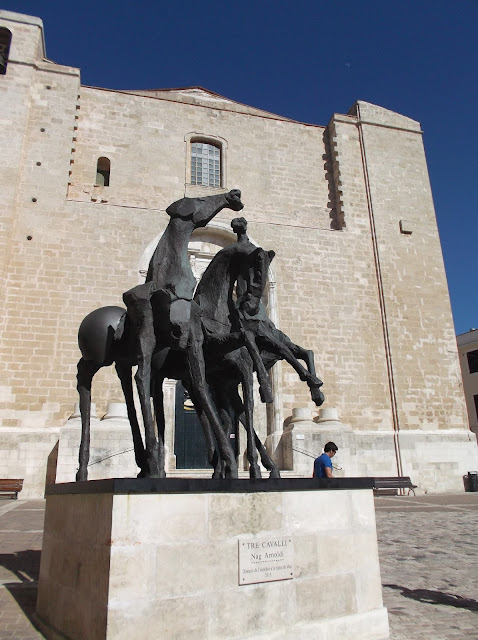 Having taken myself on a few one or two day Microadventures and in anticipation of having more time next year I found myself in Gatwick airport at the beginning of July about to test myself a little more than I have previously.

The best advice I have heard on undertaking a challenges is to be really clear on why you are doing it.  When things get difficult it’s less tempting to give up when you have a sense of purpose.  So, knowing I was going to be away, alone for a week I was keen to get a bit of understanding and experience.


The Cami de Cavalls is a 110 mile trail round Menorca.  It’s a fairly new internationally recognised route (GR223) which I said I’d walk after discovering it on a family holiday to the island.  I kind of committed myself to exploring it when I bought the guide to the route as we waited in the airport to leave last year.  (The Cami de Cavalls ISBN 978-84-8478-505-7 www.triangle.cat).  I used the book to break up the route in to 8 day sections covering about 25km a day.  However in view of wanting to make sure the journey was actually fun whilst I was doing it I gave myself permission to be flexible.  I am glad I gave myself that permission.  I can be pretty single minded and after a three days of walking in 32 degree heat I was only averaging 20 Km a day.

My first day had started well despite showers (!). 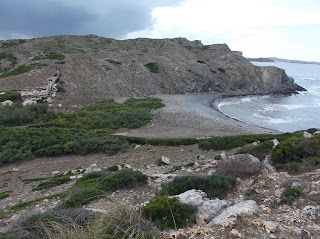 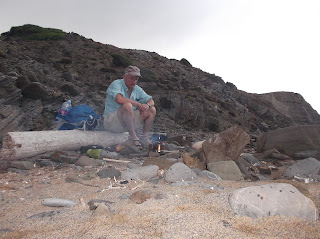 Id made good progress and wild camped in a pretty cove.  The heavens opened during the evening and I spent a clammy night under a tarp.

The next day had taken me through a mix of rocky coves and the beautiful Albufera national park. 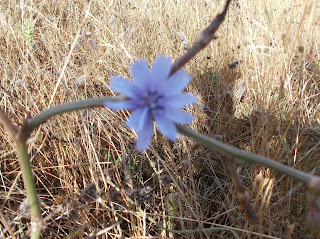 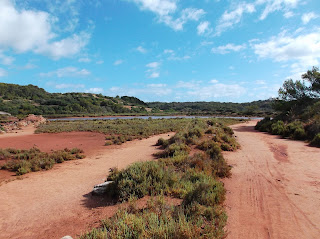 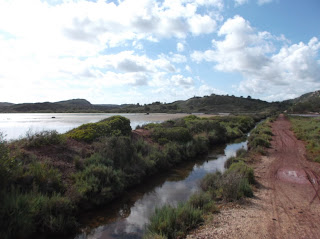 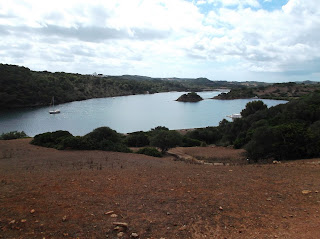 The heat however was pretty oppressive and slowed me down.  After a long haul in to Fornells I was in need of a shower and a rest so checked in to a hotel which I used as a base for the next day.  Whilst a tourist Island the Northern side of Menorca only has a couple of urbanisations and very limited access to water.   So wild camping is dependant on carrying in the weight of water needed for a night and possibly the whole following day.  Not always welcome extra weight in the heat! 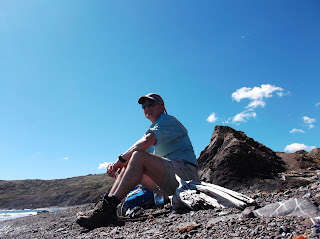 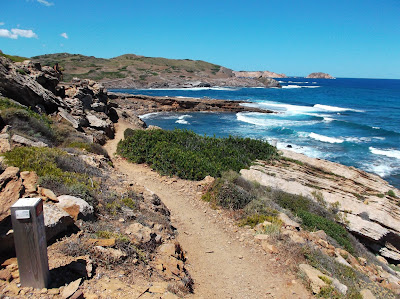 I walked a leg beyond Fornells but then had to make a call.  I could go with the plan and walk a long remote stretch carrying a lot of water with no escape route if anything happened or re appraise.  Over a beer I re visited what I was trying to achieve.  I wanted to have fun rather than present myself with an exhausting physical challenge.  I was behind my tentative schedule anyway so rather than beast myself I decided to  relocate to the South of the Island.  There are a couple of campsites that give access to the South and there are shorter hops between places where you can re stock on water etc.

So having seen a good portion of the wilder North of the island I bussed it over to the South and found a campsite . 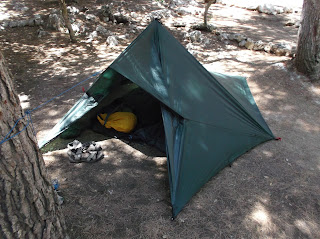 After 60 km and three days of walking it was nice to have what was in effect a rest day.  I’d also found the idea of not knowing where I was going to sleep more mentally taxing than I expected.  In hindsight I think I would have done more research and logged some options at expected stopping points.  It’s one less thing to worry about when you are hot and tired and gives an anchor to the end of the day.  I am sure not everyone needs that but it mattered to me at that point and that was useful learning for the future.

I spent the next three days following the trail on the South of the island.  The contrasts were really interesting.  Long stretches of deserted trail, pretty scenery, wildlife etc interspersed with tourist packed beaches and bars.  I found I really did not want to stop in busy places.  I felt slightly incongruous as a sweaty bloke with a rucksack among people in swim wear. 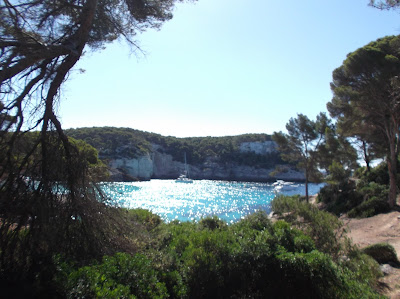 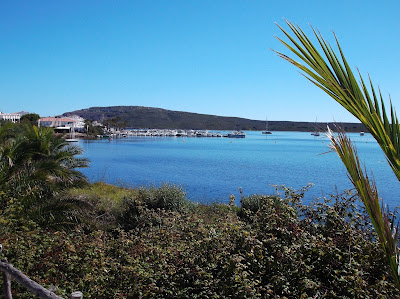 By my second to last day I had settled in to walking.  I was comfortable with up to 20 Km a day in the heat and while I was active I was pretty happy on my own.  However, I do enjoy the company of other people and that was also good learning for the future in terms of how long I want to go alone and whether I might value a partner or being in a group on longer trips.

I had an opportunity.  On my first day I’d met a couple at a lunch stop and got chatting.  They had been staying on the island for a couple of months and offered their assistance if I decided I needed help.  I could have stayed on a campsite for my last night but I wanted a bit of adventure so I dropped them a text to see if they could put me up on my last night.  The power of human decency always amazes me and I quickly got a text back with the offer of a free night in Mahon.  So, after a final days walk I was picked up by a great guy who turned out to be renting a luxury villa overlooking Mahon port.

A sociable evening of tapas and cocktails followed.  It ended with drinks in one of the roughest but friendliest bars I’ve been to in a long while.  As my host explained ‘if the Police want to know what’s going on, this is where they ask!’.

Slightly hung over the next morning I woke in the villas annex to see the overnight ferry cruising past my window.  A short week for me was over.  I had not completed every meter of the Cami de Cavall but I had used it as the back drop for some learning about myself and future opportunities.

I can walk multi day without issue.  I’m comfortable with myself but value time with other people.  Its good to be flexible.  Its good to research options on transport, accommodation and food ahead of time but be prepared to flex if something better comes up or things just aren’t looking like fun.  Above all, take a risk, talk to people and when offers come up (which they will) just say yes! 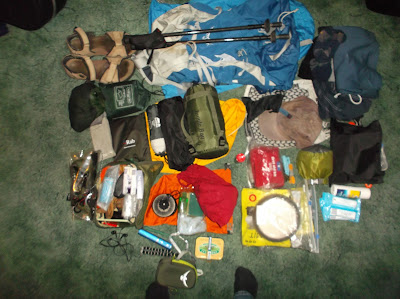