"You're not phoning up to cancel are you? Ive got things planned!"
These were my wifes words when Carl rang Friday night to discuss our planned weekend canoeing Microadventure down the Thames.  We'd been looking at the weather all week and it was looking more and more like heavy rain.  We had decided to have a final chat the night before to see if it was still worth going.  The beauty of committing to something and then telling people is that it makes it very difficult to pull out.  Especially when so many people are relying on you not being about in order to have a good time!

The weather forecast looked pretty grim for the day with heavy rain, clearing a little later and high winds the following day.  However that gave us a bit of a weather window and an opportunity to spice up a sedate trip down the river by doing a chunk of it at night. 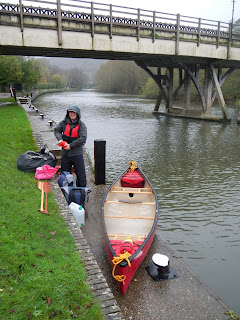 Our original plan was to canoe from Wallingford to Pangbourne during the day but we met later than originally planned at Goring in the hope that most of the rain would have passed.  It hadn't and loading up took place in that lovely November drizzle that gets down the back of your neck and slowly saps morale. 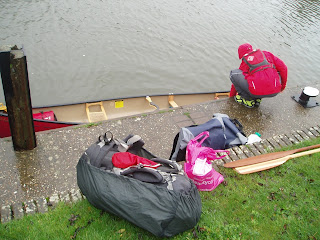 Carl as a conscientious canoe owner had proper dry bags to store his kit, I was making do with my usual rucksack with kit in dry bags inside and a bin liner for insurance.  Emergency beer supplies and biscuits were kept ready to hand in a nice pink carrier bag just in case we were looking a bit too professional. 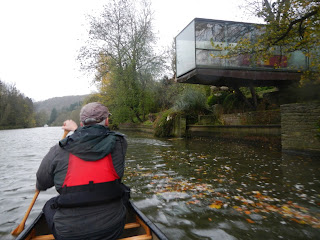 In summer this stretch of the river, in the 'prosperous South East', is probably alive with Gin Palaces and pleasure boats.  In early November we had the river to ourselves.
As the rain slowly fell we could appreciate the river as its meant to be.
Clearly others had built with the same aim and we passed this cracking summer house.

I always reflect that when you take the route less travelled at a steadier pace you come across things, natural and man made that you just never really see from a car on the motorway. 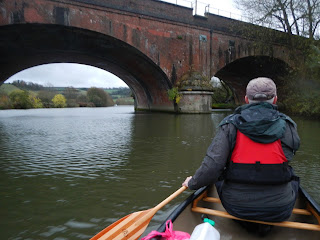 ...A railway bridge built by Brunel when functionality and design held equal weight... 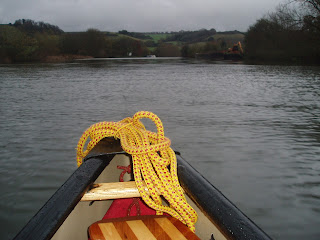 ...a vista of the Thames Valley that probably hasn't changed much in hundreds of years... 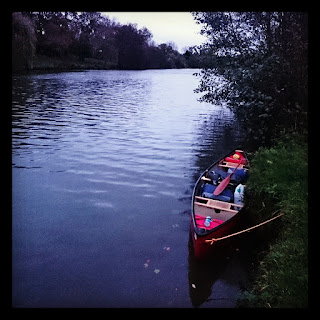 Having more time than we needed we decided to moor up for tea and biscuits just after four.  The grey day was bringing evening on quicker than we expected and by the time we set off again we were losing the light. 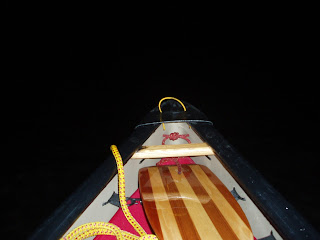 A leisurely river trip now started to feel a little edgier.  The River was black, the horizon only vaguely visible through the overhanging trees.  Running lights on the boat.  There was no sound save our paddles in the water and the occasionally river bird.

At one point in the gloom I could see what looked like lumps of rock across the water.  As we got closer they turned out to be a flock of geese settled on the water for the night. 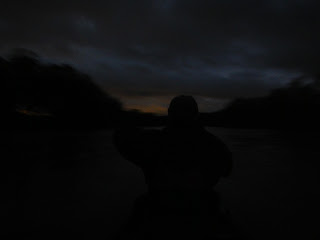 It really did feel like the world had gone to sleep and there we were gently gliding through it in our canoe. 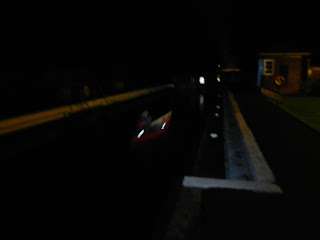 It was properly dark as we approached Pangbourne.  We passed under the road bridge quietly as people walked over.  None of them appeared to notice us which only increased the sense of other worldliness that was starting to creep in to my Psyche.
Negotiating the lock in the dark we moored up on the other side and brought ourselves back to reality with some excellent Fish and Chips eaten out of the drizzle under the balcony of a riverside building.

Our planned stop for the night was in the field of an activity centre.  Carl had a friend who worked there who had given us the nod to to pitch for the night.  This avoided the potential for ending up in someones back garden in the dark.
Knowing where you are going and finding it from a dark river are two different things.  The river was clearly flowing faster than we thought after the heavy rain of the previous couple of days and we nearly missed our landing point.  However after a quick back track we sorted out where we were pitching tents for the night and sorted ourselves out.

Having plenty oof time we resolved to try and get a fire going to dispel some of the cold and damp.  If I'm honest I had my doubts about being successful with everything being so wet. 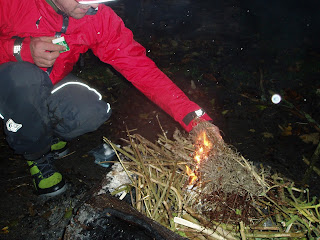 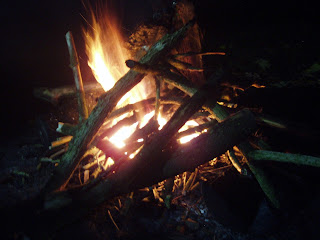 However, Carl came up trumps.  We spent time making sure we had lots of tinder and kindling.  With only one match and some cotton wool Carl got things started.  Before long we had a blazing fire being kept stoked by the increasingly strong wind blowing off the river. 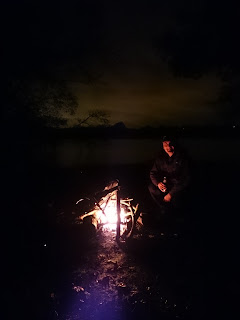 Sometimes having the basics is enough.  With a good fire, a beer and a dry place to sleep for the night I was so glad we had decided to brave the elements and get out. 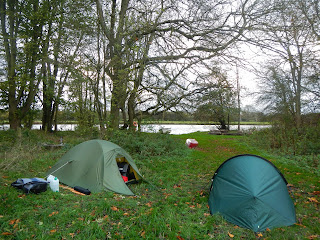 After a really windy night (thank heavens for ear plugs!) we slept in as we only had less than an hours paddling to our get out point.

Id brought some porridge and coffee for the morning.  However Carls friend had let slip that we were going to be there to the local Scout group. 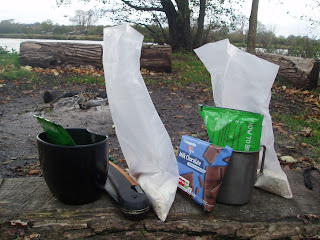 They apparently were practicing for an out door cooking competition so Carl had agreed they could come and practice on us.

Having had our first breakfast we were joined just after nine by a gang (is that the collective noun?) of Scouts.

In short order they built a fire, engaged in organised chaos, which a short time later resulted in breakfasts fit for kings! 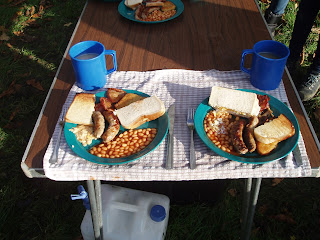 By mid morning we were back on the river and at our get out point an hour later.

In less than 24 hours we had canoed a river, entered another world which is the river at night, made a fire against the odds and enjoyed the best of breakfasts,  Winter Microadventures can sometimes be short but never let the lack of daylight or time get in the way of having fun!