I like holidays in the sun and spending time by the pool with the family. That is how I've  spent the last two weeks of July but how was I going to fulfil my monthly Micro adventure challenge on holiday given that the first two weeks of July at home had been so busy?
Microadventures don't always need to be extravagant affairs.  At their simplest I think they are about getting out of your normal routine and doing something different.  So my July Microadventure was going to have to be less than a full blown night away and more of a simple do something different affair.

Airline weight limits prevented me prioritising adventure kit so a day out would have to suffice.  In some ways the challenge of being abroad, away from the familiar would make up for the lack of a night out.  We had rented an apartment on the edge of the Cilento National Park in Southern Italy.  The coastal sections, according to the guide book, were spectacular.  Good old Google maps offered a 10 mile walk with the prospect of a beautiful view from Ponte Tresino.  Navigating only by phone and a Disney style tourist map I had a suitably enhanced challenge for the day! 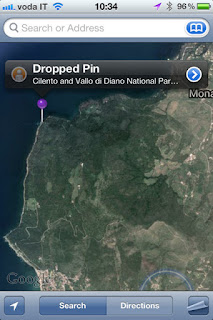 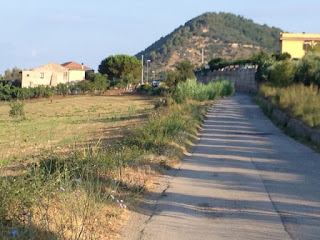 I set off about 0700 with lots of water and headed towards the sea.  I left early as the temperature was likely to be well above 30 C within a couple of hours.


Within the hour I'd  reached the beach by dead reckoning and turned north hoping to find a track which I had seen from a distance and which looked like it led the right way.   However, when I arrived at the start of the path I was met with a classic 'Privato'.  Normally I would have cracked on and pleaded ignorance.  However the CCTV poles and shiny steel rising bollards suggested a Bond villain style coastal retreat.  Eager not to be fed to sharks or castrated by laser I decided to see if there was another path!  Sadly, after an hour of uphill farm tracks leading to pleasant but gated villas I realised my route to the 'wild and beautiful' Cilento coast was going to be denied to me.
By now the heat was increasing and I decided to head back reasoning with myself that I had at least given it a go.  But I had not really justified a micro adventure write up.

As I neared home a short time later I realised however that there was another offering available to me. 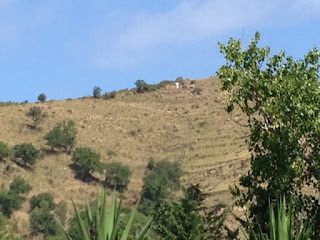 On the hill opposite our villa was a statue. That would surely offer a good view at least and normally these things have a pretty good route to them so people taking a stroll can access them comfortably.  Oh how very British I was being!

Several aborted trips up likely, dusty roads later I was feeling a little frustrated at the lack of Italian footpath signs.  I just could not find a way up!

Then from a little run down farm a small elderly man appeared, a bit like the shopkeeper in Mr Ben.  My only Italian is 'I'm sorry I don't speak Italian'.  I used this to great effect with the man who smiled and replied in his best Italian with words to the effect of 'and I don't speak English'.

After many smiles and mimes of walking to the statue on the hill he took me by the hand and led me to a rough track at the entrance to an olive grove.  He pointed up, gestured that I should zigzag and waved goodbye as I set off uphill.

At last I had a clear sense of being on the right course. Half an hour later, having scaled walls and followed goat tracks I was no closer to my objective, starting to get thorn cut legs and sweating to the standard of an Englishman abroad.  For the second time I decided to call things a day. 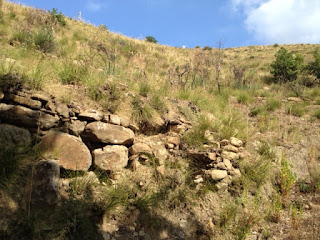 As I headed down by a completely different path who should I meet but my Italian friend.  He looked alarmed at my appearance and a little surprised that I had re emerged from an unexpected direction.  I shrugged and shook my head. He then spent more time pointing uphill, making climbing motions and pointing in a zigzag way.  What I understood was that if I climbed the way he pointed and turned left at a tree I'd find a path to the top.  He then offered to whistle when I reached the right place.
So, for the final time I set off happy in the knowledge I had a guardian angel. 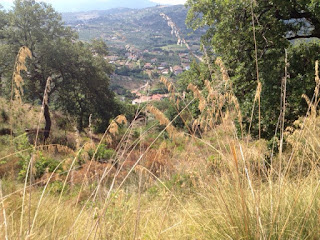 A few wall climbs and a lot of thorn bushes later I stumbled on an overgrown track.  I could see a route to the statue and followed the rough path.  Within a few hot minutes I reached my objective at last.  The view was beautiful and all the more rewarding for having reached it with no map, a bit of determination and the friendliness of a local with whom I had no common language other than a smile. 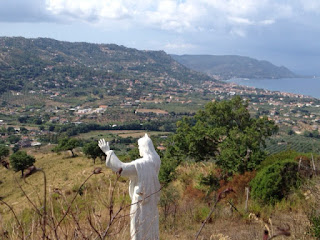 So, on reflection I am counting this as my July microadventure because of the sense of satisfaction and the departure from the normal holiday experience.  Though when I look back on it I don't think I ever heard the man whistle!
Posted by Steve at 20:58